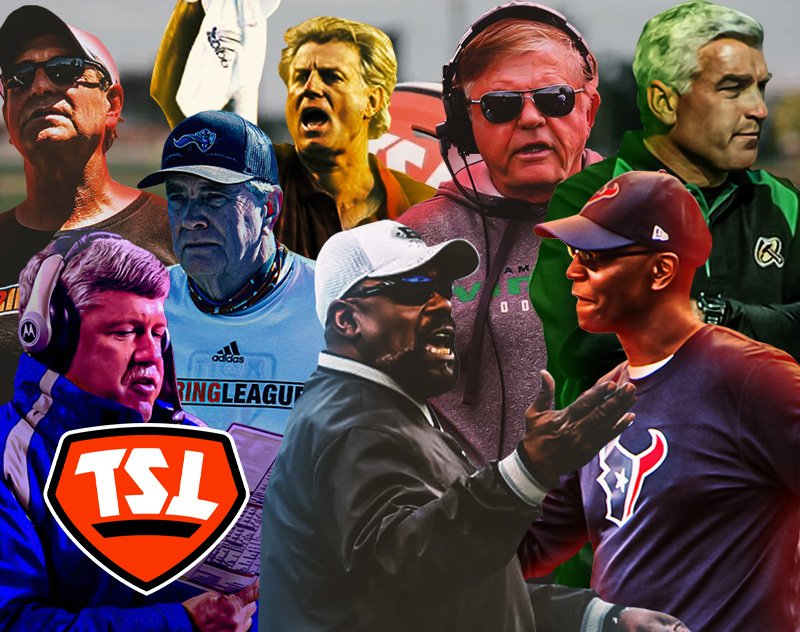 Breaking Down The Spring League’s 2021 Coaches

Before we know it, The Spring Leagues (TSL) 2021 season is going to be upon us, as it kicks off on May 6th. Over the last couple of months, the league officially announced which coaches will be featured in TSL this year.

For fans of spring football, this group of coaches is perfect. There are plenty of AAF & XFL alumni, along with some CFL talent as well.

To start with, the Generals will once again have Bart Andrus as their head coach this season. Andrus led the Generals to a Championship victory in 2020.

Coach Andrus returns to the team he lead to the #TSL2020 championship. His coaching resume includes positions in the #NFL, NFL Europe, the #CFL, and college football!

Bart Andrus has been around the block plenty of times, holding multiple positions in the CFL, along with being the head coach for Team 9 in the XFL before the league shut down. His experience should once again give the Generals a solid chance at reaching the championship game.

Terry Shea is also coming back to the TSL, and will be coaching the Aviators.

The Head Coach of the #TSLAviators is…TERRY SHEA!#TheSpringLeague's OG head coach guided the Aviators to the #TSL2020 Championship Game. Over the course of his 50+ years of coaching experience, Coach Shea has become well-known for his work with top QBs.

Shea led the Aviators to a 2-1 record last season, and they also made it to the championship game. It will be interesting to see how he fares this year with the same team.

One of the most exciting coaching developments was the announcement that Kevin Gilbride (yes, the New York Guardians legend), is going to coach the Jousters.

Coach Gilbride's 20 years of #NFL coaching experience includes stops as the Head Coach of the @Chargers and TWO #SuperBowl rings as offensive coordinator of the @Giants!

Kevin Gilbride needs no introduction. He won two super bowls as the OC for the New York Giants, and we all enjoyed watching him coach in the XFL’s 2020 season leading the New York Guardians. Luis Perez will be the QB for the Jousters, so it will be fun to watch the two of them play together once again.

As if XFL fans weren’t excited enough already, it turns out that Hal Mumme will be the head coach for the Linemen, one of the two new teams to join the TSL.

Coach Mumme has an extensive college head coaching career, including stops at Valdosta State and Kentucky, where he's credited for being the founding father of the air raid offense!

Hal Mumme was a fan favorite in the XFL, as he was the OC for the Dallas Renegades. Despite breaking his leg on the sidelines in week four, he stayed out and finished coaching the game. That is the stuff of legends. The Linemen are in good shape.

Jerry Glanville will also be rejoining the TSL, and resume his position as head coach for the Conquerors.

The former Oilers & @AtlantaFalcons head coach returns to the Conquerors looking to improve on their 1-2 #TSL2020 finish! Coach Glanville brings 50+ years of coaching experience to #TheSpringLeague.

Similar to Gilbride, there is no need to introduce a legend such as Glanville himself. Despite the Tampa Bay Vipers struggles in 2020, Jerry was an excellent defensive coordinator, and is enjoyable to watch on TV. Hopefully the TSL will mic him up from time to time, as the XFL did.

Ted Cottrell is another who is returning to the league, as he will be coaching the Blues for the second season in a row.

Coach Cottrell has been the DC for 4 different #NFL teams (@BuffaloBills, @nyjets, @Vikings & @Chargers) in addition to many more defensive posts. He returns to lead the Blues squad that went 1-2 at #TSL2020

One of the new additions to the TSL this year is Larry Kirksey, who will take the reins of the brand new Sea Lions.

His resume includes stops at @GatorsFB, @AlabamaFTBL, @AggieFootball, & more over 17 years in the college ranks and positions w/ the @49ers, @Lions, @Jaguars, @Broncos & @HoustonTexans in 20 years at the #NFL level. pic.twitter.com/KTKTmI5NwA

Kirksey has been in and out of the NFL for many years, holding positions with teams such as the Texans, Jaguars, Lions, and others throughout his impressive career. Another XFL 2020 alumni, Kirskey served as wide receivers coach for the Seattle Dragons. Despite being an expansion team, the Sea Lions have a lot of talent and should perform well this season.

Finally, we have Peter Vaas who is coaching the Alphas, a team looking to improve upon their 2020 season that came up just short of the championship.

Coach Vaas' 45+ year coaching career spans the college and developmental football levels. His 2 most recent head coaching jobs were in NFL Europe where he won back to back World Bowls with the Berlin Thunder!

Peter Vaas was most recently in NFL Europe, and won back to back world bowls with the Berlin Thunder. He provides plenty of experience to the Alphas, and will certainly be key in developing these young players looking for an opportunity.

Spring football fans should be very excited for The Spring League’s 2021 season. With the addition of these talented coaches, and the expansion of these two new teams, the TSL is shaping up to be very similar to the AAF and XFL when it comes to their infrastructure.

By bringing in such renowned names like Hal Mumme, Kevin Gilbride, and others, it provides more value to the league overall, and also improves their public image. The 2021 TSL season is shaping up to be a fun one – so buckle up, because it is certainly going to be a ride to remember.

Are you excited for The Spring League’s 2021 season? What team do you plan on rooting for? Let us know down in the comments below, or join the conversation on Discord!