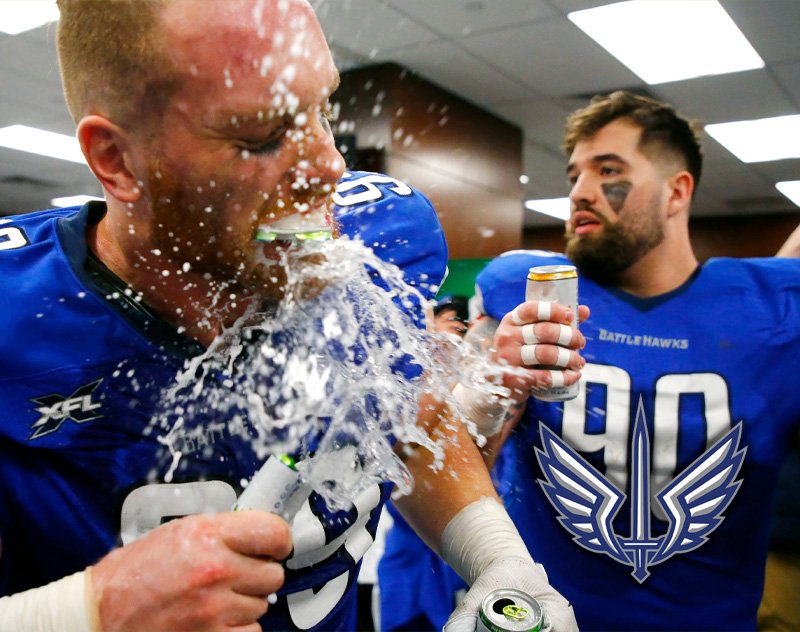 The Defining Moments of the St. Louis BattleHawks 2020 Season

Despite the seemingly spontaneous appearance and overwhelming presence of the COVID-19 virus and the abrupt end to the XFL season that followed, the fan-favorite St. Louis BattleHawks were able to jam pack the highlight real with a myriad of iconic moments, both good and a smidgen bad. From quarterback Jordan Ta’amu’s rocket arm, the team’s bulldozer-esque running game and commanding defense, even from the special teams, every player contributed to creating an engaging and memorable season. In anticipation of the XFL’s return, hopefully in 2022, here are the best, and worst BattleHawks moments from the XFL’s 2020 season.

A mere four plays into the BattleHawks’ home opener, just two minutes into the game, running back Christine Michael made history with a “bruising run” up the middle for the first BattleDome touchdown in nearly five years. With this early and overwhelming show of force, the BattleHawks were able to set the tempo for the rest of the game and fire up their record- setting crowd.

CHRISTINE MICHAEL IS TOO STRONG.

The BattleHawks were able to maintain their momentum for the majority of the game, defeating the Guardians in a convincing 29-9 win.

It’s hard to talk about the BattleHawks without addressing the iconic Seltzerbrations. Establishing a partnership with Bud Light Seltzer prior to the season, every XFL team was provided with a boat load of Seltzer following every win. To say the least, BattleHawks players went nothing short of absolutely bonkers.

We’re talking biting into cans, chucking them around, and spraying alcohol everywhere.

If you thought the prospect of facing a 300-pound defenseman didn’t sound terribly enticing already, look at what Jake Payne did to this can:

As you can see, things got a little rowdy. So much so, in fact, that the BattleHawks had to pay $10,000 in damages after their celebration in Week 1. Not that the fans minded, of course. Social media ate this stuff up, and it was great publicity for the league.

In Week 4, in a matchup against the Seattle Dragons, approaching half- time with two minutes left to play, the BattleHawks were on the cusp of yet another touchdown. Going for a gutsy play, quarterback Jordan Ta’amu faked a handoff and lateralled the ball to running back Keith Ford. The ball bounced off Ford’s hands and disaster nearly struck. Bobbling the ball, evading his pursuers, Ford finally regained control and squeezed past the pylon. This touchdown gave the BattleHawks the points necessary to edge the Dragons in a thrilling 23-16 victory.

Following the BattleHawks’ dominant start against the Guardians, in an attempt to drive the final nail in the coffin against their divisional rivals, kicker Taylor Russolino was given the herculean task of kicking a 58-yard field goal. If completed, the feat would set a new League record. The ball was snapped, the ball was set upright, and the ball was launched. Soaring through the air, the football rapidly glided towards the goal post, the crowd silent in anticipation of what could be. By little more than an eyelash, the ball squeezed over the crossbar. The crowd erupted; they had truly seen everything!.

With elements of trickery, an incredible level of athleticism, and what it meant for the League, the fans, and the city, Joe Powell’s kickoff return is considered by most St. Louis fans as the great moment in the BattleHawks’ short history. It’s hard to disagree. Wrapping up their drive with a field goal, the Guardians kicked off to wide receiver Keith Mumphery, who was the designated kick returner. Mumphrey started running the ball back, and a split second before he got drilled, he suddenly tossed the ball to Joe Powell, who had raced to Mumphrey from his original position. Needless to say, the defense was unprepared and completely taken by surprise. The trick had worked. Evading the defenders left in his way, Powell thundered down the field for over 80 yards. At the goal line, Powell was nearly taken down, but it was too late.

Mere moments after his touchdown, still catching his breath, Powell was asked what was going through his mind as he was running.

Powell responded bluntly, “Get to the endzone.”

Following the nail-biting touchdown run by Keith Ford, the BattleHawks elected to go for a two-point conversion. The ball was snapped, and the defense, anticipating the ball to be run on the left side as it had the previous play, were caught completely off guard. Wide receiver De’Mornay Pierson-El seemingly came out of nowhere, caught the lateral from Ta’amu, and looped around on the right. The endzone was wide open, with every defender either behind Pierson-El or on the other side of the field. But instead of running the ball in, Pierson-El overthrew the ball to Marcus Lucas, and the pass bounced off of the top of his receiver’s hands. The botched play literally brought BattleHawks coach Jonathan Hayes to his knees. Luckily for the BattleHawks, this mistake didn’t cost them the game, and was only a small hiccup in an otherwise fantastic performance from Pierson-El.

After a slow start against the Houston Roughnecks in Week 2, the BattleHawks were storming back, turning a 21-6 deficit into a close match with two unanswered touchdowns. The BattleHawks had the ball with around 10 minutes left in the fourth quarter and were driving down the field. On 2nd and 14, Roughnecks linebacker DeMarquis Gates jumped over the line of scrimmage for a split second, mistakenly believing the ball had been snapped. Believing he had a free play, Ta’amu chucked the ball deep where it was intercepted by cornerback Jeremiah Johnson.

Jordan Ta'Amu was nearly perfect in the 2nd half until this interception.

Roughnecks return it inside the ten and convert the score.#XFLRoughnecks 28#XFLBattlehawks 18

Immediately after the play, Ta’amu was signaling to the refs, looking for a flag. But no penalty was called, and the crescendo of momentum the BattleHawks had built up was dissipated in mere moments; an anticlimactic whimper to what had been a great drive. The BattleHawks went on to lose the game 28-24.

Playing their first game in franchise history, the BattleHawks were down 9-6 late in the third quarter. The offense was unable to drive any further, and on 4th and 4, the task of kicking the ball down the field was allotted to punter Marquette King. The ball was snapped, and in just a few seconds it was gone. Landing at around the 7-yard line, the ball bounced towards the 1, and after rolling through the legs of Jerrod Heard, miraculously stayed there. It was, until linebacker Steve Beauharnais knocked it into the endzone. This gaff turned a perfect punt on the 1-yard line into a 35-yard touchback, potentially a huge game changer.

Someone check on @PatMcAfeeShow after this Marquette King punt 😆

Asked what he was thinking as he went for the ball, Beauharnais responded:

“I thought he touched it, so I tried to get on the ball before he got on the ball and it went in the endzone.”

Sometimes, that’s just how it is.

And there we go! What do you think of our list? Is there any highlight you believe deserves to be on or off either of the lists? Let us know your thought in the comments down below or join the conversation on Discord.