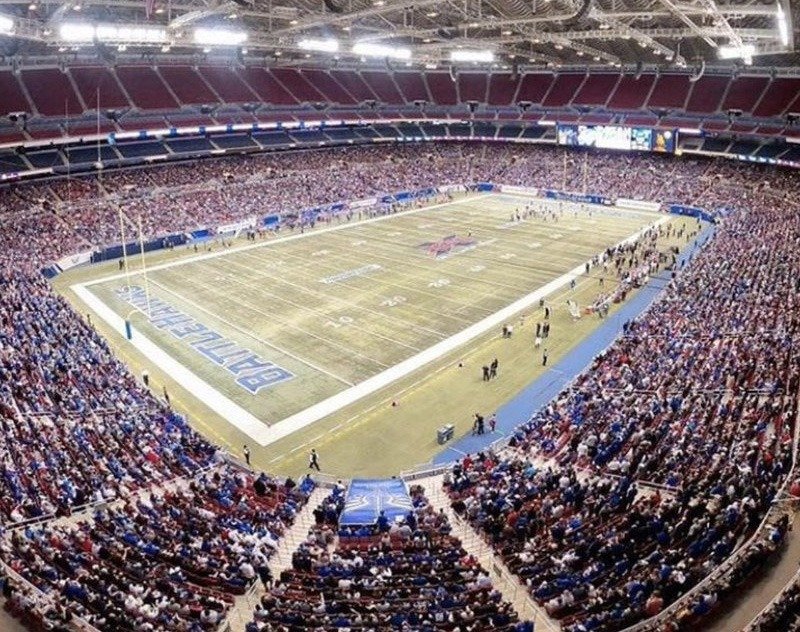 The Storied History of the BattleDome

Through its long history of prestigious teams and world class fans, St. Louis has garnered itself a nationwide reputation. If not the best, St. Louis is easily one of America’s greatest sports cities; in that facet, it’s hard to compete with. Every great sports city needs great stadiums to accompany their teams, and St. Louis has more than its fair share. Despite the city’s most notable park being the Cardinals’ Busch Stadium, none possesses a history as fascinating and strange as The Dome at America’s Center, known commonly by BattleHawks fans today as “The BattleDome.”

The year was 1988: Bill Bidwill and his Cardinals had packed up for Arizona and St. Louis’ football faithful were left without a team. The local fan base radiated with passion for the sport and the longing for a team swept over the city. The people of St. Louis needed a football team and the city was determined to get them one. It was decided that in order to attract a new franchise, St. Louis would need to build a fresh, bold, state of the art venue; something that would be irresistible to the perpetually expanding NFL. Enter “The Dome.”

Costing 280 million dollars, a whopping 470 million adjusted for inflation, the proposed Dome was considered “the greatest football stadium in the world” at the time of its inception. Overly confident in its proposal, St. Louis put in for an NFL expansion franchise in 1991 and construction on the Dome began the following year. Unfortunately for the city and its fans, St. Louis’ proposed “Stallions” never came to fruition as the NFL wound up picking Charlotte and Jacksonville for new teams instead.

Despite this initial failure, it appeared St. Louis would be getting a new NFL franchise anyway. Advertising executive James Orthwein had purchased the New England Patriots from an indebted Victor Kiam and announced his intentions to bring the team to his hometown of St. Louis. This plan was thwarted however when Robert Kraft, owner of Foxboro Stadium, refused to let the Patriots out of the long-term lease prior ownership had established with the venue. The hitherto empty Dome was finally able to find a tenant in 1995 when Los Angeles Rams owner Georgia Frontiere announced her team’s relocation to the city of St. Louis. As part of the relocation deal, St. Louis agreed to keep the Dome’s amenities in the top 25% of NFL venues. The soon to be completed stadium, referred to as the Trans World Dome from 1995 to 2001, was finally in business and the St. Louis Rams were born.

With the TWA Dome under construction and unable to host any NFL games until November, Frontiere’s Rams began their season in downtown’s Busch Stadium, the dual-purpose venue where the football Cardinals had played prior to their departure. The Rams played nine games in anticipation of their new stadium, winning their first four games and then dropping the next four of five. And after three long years of waiting and meticulous construction, the stadium proposal on which the city rested its future in football had finally become a reality. The long-awaited Dome was complete and ready to meet its destiny of triumph and tribulation. With the city in a state of buzz, the Dome’s opening game easily surpassed the city’s previous attendance record, the venue’s additional seating providing the means to do so. The 65,000 fans in attendance were able to go home as happy as they came, their team providing an exhilarating 28-17 victory against their then divisional rivals, the Carolina Panthers. Despite showing initial promise with their early victories, the Rams lost their last five of six to finish the year 7-9. Over the next three seasons, the Rams got progressively worse, finishing 6-10, 5-11, and in 1998, 4-12.

Wallowing in the filth of dead-last in the NFC West, the Rams’ record in 1998 surpassed only that of the Philadelphia Eagles. This catastrophic season, however, serves today as contrast to the incredible run made the following year. The 1999 Rams are the greatest team in franchise history, and certainly the greatest to play in the Dome. Coming last in 1998 and going on to win the Super Bowl in ’99 serves as one of the greatest turnarounds in sports history and has cemented in stone the legacy of what became known as “The Greatest Show on Turf.” Under the leadership of the Hall of Famer, Kurt Warner, The Greatest Show on Turf went on to play in two Super Bowls, though they lost the latter. If you’d like to hear more about this dynamic offense, easily one of the greatest of all time, you can check out my article on the history of St. Louis football here: https://xflnewsroom.com/column/the-history-of-st-louis-football/

As the Rams Super Bowl team progressively fell apart over time, the Dome began to see signs of wear. Now named the Edward Jones Dome (TWA had been acquired by American Airlines and did not claim the naming rights for the Dome), St. Louis football had entered a new dark age. Just like the late 90s, the Rams’ record got progressively worse until it very nearly could not go any lower, winning only one game in 2009. This time however, there was no Super Bowl win to be found around the corner, and the Dome’s last speck of luster was lost to both the fan base and the Rams. Renovations were needed to keep the Dome in the top 25% of NFL stadiums, and though the Rams estimated a total of 800 million dollars would need to be spent to achieve such a mark, only 124 million dollars were allocated for upgrades. The upgrades included new LED video displays, LED fascia boards around the bowl of the Dome, added premium areas, and fresh paint around the stadium. The locker room was rebuilt and was moved to the south end zone, and in 2011 new HD monitors were installed throughout the Dome at concession stands.

A brief period of mediocrity followed for the Rams, and plans put forward to further upgrade the Dome were put down. Fans were not impressed with what was increasingly being seen as an urban eyesore, and Time magazine ranked the venue the 7th worst major sports stadium in the United States. With the once proud Dome crumbling under its increasing age, and with an uninspiring Rams team on the field, a noticeable emptiness was present in the stands with fans no longer showing up for games. The Rams ownership took advantage of this, and announced their intentions to build a new venue in Inglewood, California. Desperate to keep the team, St. Louis fully opened its wallet and then some, flat-out offering the Rams a brand-new stadium worth just under a billion dollars. No matter how the Rams moved forward, the future did not look bright for the Edward Jones Dome.

On December 17th, 2015, the St. Louis Rams played their last game at the Edward Jones Dome, defeating the Tampa Bay Buccaneers 31-23. The Rams filed their request to move back to Los Angeles on January 4th, 2016, and eight days later they were gone. The Dome was left empty, and taxpayers in the area were forced to pay off the stadium’s remaining 144 million dollars of debt, now without a football team. The venue continued to be used for events and concerts, and has hosted big names like Taylor Swift, Guns N’ Roses, Beyonce, and many more. Over the years, along with concerts, the Dome has hosted religious conferences, dirt track races, college football and basketball, and professional soccer. On July 23, 2016, the Isaac Bruce Foundation held a charity flag football game in which former St. Louis Rams legends came together to relive their glory days. Other than this however, it didn’t seem likely that the Dome was going to see any more football soon, or ever for that matter. Despite things looking grim, on January 25, 2018, the Dome’s situation had once again changed drastically–this time for the better.

After the short lived AAF went under, failing to do what so many had tried in the past—provide America with spring football, an old name in the business came back to give his long dead league new life: Vince McMahon. The 2001 iteration of McMahon’s XFL was nothing short of a disaster. With ratings and attendance conspicuously plummeting every week, the League went under after just one season. But after nearly 17 years, the entertainment titan was ready to bring back his beloved XFL, and much to the excitement of local fans, it was announced that St. Louis would be getting its own team. That team, was the BattleHawks.

The BattleHawks were an instant hit, St. Louis fans led the league in social media following, merchandise sales, and later, attendance. The BattleHawks’ first home game, its “Dome debut,” was set for Week 3 of the season, on February 23, 2020. League executives didn’t expect a huge turnout, and as a result, only the lower bowl of the Dome was open for fans. Demand for the home opener however, was enormous. Nearly 30,000 fans came out to watch their new heroes, and they certainly weren’t disappointed by the play they saw on the field. The game was a complete and utter blowout, the BattleHawks pummeling the visiting New York Guardians with a 29-9 rout. Attendance for the game surpassed expectations by so much, that the stadium didn’t have enough staff to accommodate the crowd. This wave of enthusiasm carried into the next week, with nearly 29,000 fans turning up to rock the Dome. These impressive figures along with continual requests from diehard fans spurred executives to open the upper deck, a move that would allow an additional 30,000 fans to attend the next home game, Week 7 against the Los Angeles Wildcats. Tickets were selling like they were being given away for free; if the game wasn’t going to sell out, it was going to be close. Things were looking bright for the Dome and the BattleHawks, or so people thought.

The Coronavirus pandemic was in its early stages, but it was already making its presence known. Sports leagues were shutting themselves down, and the XFL found itself on the chopping block. The season was cancelled, and as a result of lost revenue, the XFL soon filed for bankruptcy, robbing St. Louis of their highly anticipated sell out game. Hope was not lost, however. With Dwayne “The Rock” Johnson and Dany Garcia co-purchasing the League with Red Bird Capital, St. Louis will have another chance to rock the Dome in 2022, hopefully as the League’s opening game. If you’d like to see my reasons as to why this is best for all parties, you can check out my article here: https://xflnewsroom.com/column/my-idea-for-the-perfect-xfl-kickoff-game/