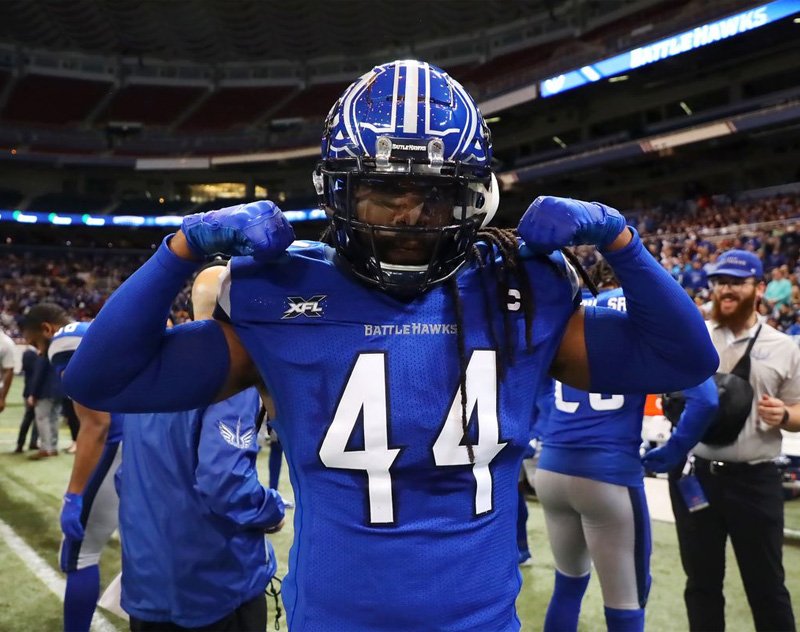 When the kicked off in 2020 they hit a goldmine in St. Louis. STL was the only XFL location that wasn’t home to an NFL franchise. The city had recently lost The Rams to the city of Los Angeles, and showed that they would fully embrace a football team regardless of the league. The St. Louis BattleHawks boasted the best attendance in the league, and was even on course to sell over 50,000 tickets to its week 7 matchup against the Los Angeles Wildcats at The Dome.

Many BattleHawks fans will remember Joe Powell for his 80+ yard kickoff return for a touchdown against the New York Guardians. Joe Powell’s kickoff return is considered by most St. Louis fans as the great moment in the BattleHawks’ short history. It’s hard to disagree. Wrapping up their drive with a field goal, the Guardians kicked off to wide receiver Keith Mumphery, who was the designated kick returner. Mumphrey started running the ball back, and a split second before he got drilled, he suddenly tossed the ball to Joe Powell, who had raced to Mumphrey from his original position. Needless to say, the defense was unprepared and completely taken by surprise. The trick had worked. Evading the defenders left in his way, Powell thundered down the field for over 80 yards.

Beyond the XFL, Powell short stints in the NFL with the New York Giants and Buffalo Bills. Powell also spent time in the short AAF season, playing with the Birmingham Iron.

This is just another name among many that has moved on to a new career opportunity. Although we’re still waiting to see what is next for the XFL, we always love to report these kind of stories.

What is your favorite BattleHawks moment of the 2020 season? Let us know down in the comments below or join the conversation on Discord.

You can read the full press release from the National Arena League Below:

GREENSBORO –  The Carolina Cobras announce the signing of former NFL defensive back Joe Powell for his eighth season of professional football, and sixth season of arena football.

Joe Powell (6’2, 205) was most recently signed by the Hamiliton Tiger-Cats of the Canadian Football League (CFL) during the 2020 season as a member of the practice squad. Prior to the CFL, Powell played for the St. Louis Battlehawks of the XFL where he was drafted as a strong safety during the league’s 2020 revival season. He scored the first special teams touchdown in team history on a 90-yard kickoff return, he spent the entire season with the Battlehawks until the XFL cancelled the remainder of the season, the Battlehawks were 3-2 and were tied for 1st in the east division with the DC Defenders.

Head Coach Josh Resignalo said he and the Cobras organization are excited to have Joe for the 2021 Season. Through everything everyone has been through this past year Joe included, it is one of those things that everything lined up to make this happen. Joe was supposed to be getting ready for 2021 CFL season with Hamilton. Unfortunately Covid still is hindering some businesses including the CFL as they are not sure if and when they will get started. It would be tough for anyone to have to sit out 2 seasons back to back. So this is an opportunity for Joe to keep playing until NFL/XFL/CFL come calling and stay ready for when he gets that call. Joe is familiar with several Cobras players, including long time friend Julius Gregory. Julius said “757 Brothers finally together”.

Powell started in the 2019 season with the Birmingham Iron of the Alliance of American Football League (AAF) where he made the final roster as a free safety. Powell helped the team to a 5-3 record before the league was suspended he was shortly after assigned to the Baltimore Brigade of the Arena Football League where he finished the rest of the 2019 season in the AFL as a defensive back and kick returner. During that season in the AFL he landed 45 tackles, 10 pass breakups, five forced fumbles, two fumble recoveries and caught seven interceptions. Powell also returned 20 kicks for 502 yards and scored four touchdowns on kick return. Powell spent the 2018 season with Baltimore as well where he totaled 44 tackles, seven pass breakups, four interceptions including one returned for a touchdown. He also was on the Atlanta Havoc roster of the American Arena League that season before leaving for the Brigade.

About signing with the Cobras Joe had very few words. “There isn’t much to say but the NAL Championship is coming back to Cobra Nation”, said Joe.

The arena football star spent the previous two seasons in the NFL as a member of the Buffalo Bills practice squad spending both the 2016 and 2017 seasons with the Buffalo Bills under head coaches Rex Ryan (2016) and Sean McDermott (2017). Powell also played for the New York Giants where he entered training camp with the team making it through the major of NFL training camp before his release on August 30th. Powell spent the remainder of the season with the Cleveland Gladiators where he amassed 30 tackles, six pass breakups, five interceptions including three interception returns for touchdowns. His rookie season of professional football was spent with the Lehigh Valley Steelhawks of the Professional Indoor Football League (PIFL) during the 2015 season. He earned PIFL Rookie of the Year honors after a 52.5 tackles & 11 interception season.

Powell played his college football at Globe Institute of Technology, a junior college in New York, NY. During his college career with the Knights he recorded 53 tackles, 1.5 sacks, and one interception. Powell is a native of Portsmouth, Va and played high school football & track at I.C. Norcom High school

ABOUT THE CAROLINA COBRAS