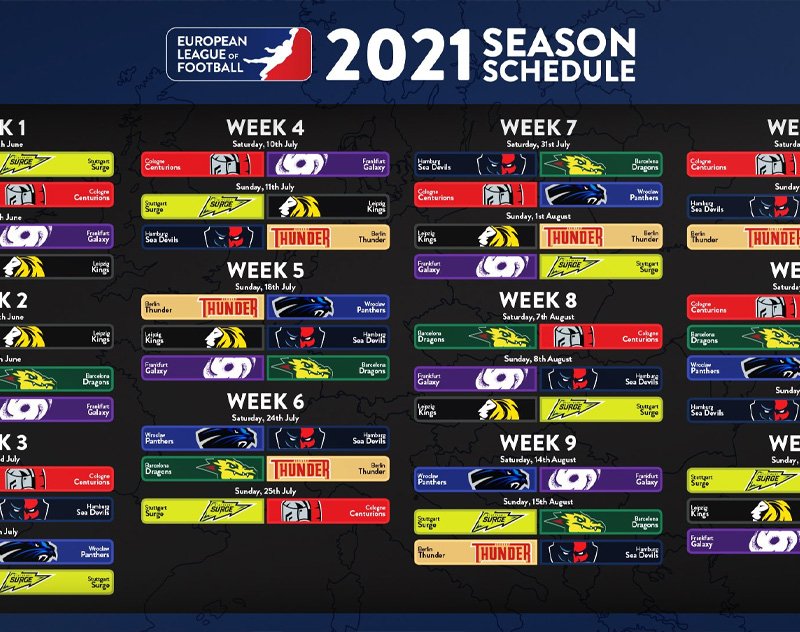 With XFL on the sidelines for 2021 and the CFL possibly delaying the start of their season, there’s another option out there. The European League of Football agreed to terms with the National Football League that would allow them to incorporate some of the iconic NFL Europe identities.

The ELF season is fast approaching and many were wondering when the season would actually start and how the teams would be split up. You ask and you shall receive. Earlier today the ELF posted the official divisions for its first season. The leagues North Division will home the Hamburg Sea Devils, Berlin Thunder, Wroclaw Panthers and Leipzig Kings. The South Division is comprised of the Frankfurt Galaxy, Cologne Centurions, Stuttgart Surge and Barcelona Dragons.

The official divisions for the first season! pic.twitter.com/nQtQalAX3B

The league also revealed it’s full 2021 season schedule, which is slated to kickoff June 19th with the Barcelona Dragons taking on the Stuttgart Surge, and set to wrap up September 5th.

Here we go! The schedule for our first season! pic.twitter.com/gXoVBCZ9Og

Following its inaugural 2021 season, SEH plans to expand the ELF by inviting teams from other nations, eventually leading to 20 teams competing from ten countries.

SEH Sports & Entertainment Holding, which was set up by Zeljko Karajica, is looking to launch the new eight-team competition next June. Karajica has been named chief executive of the league. He will be joined by former football player and current coach Patrick Esume in running the competition.

Following its inaugural 2021 season, SEH plans to expand the ELF by inviting teams from other nations, eventually leading to 20 teams competing from ten countries.

Will you be tuning into the ELF this summer? Let us know down in the comments below or join the conversation on Discord.