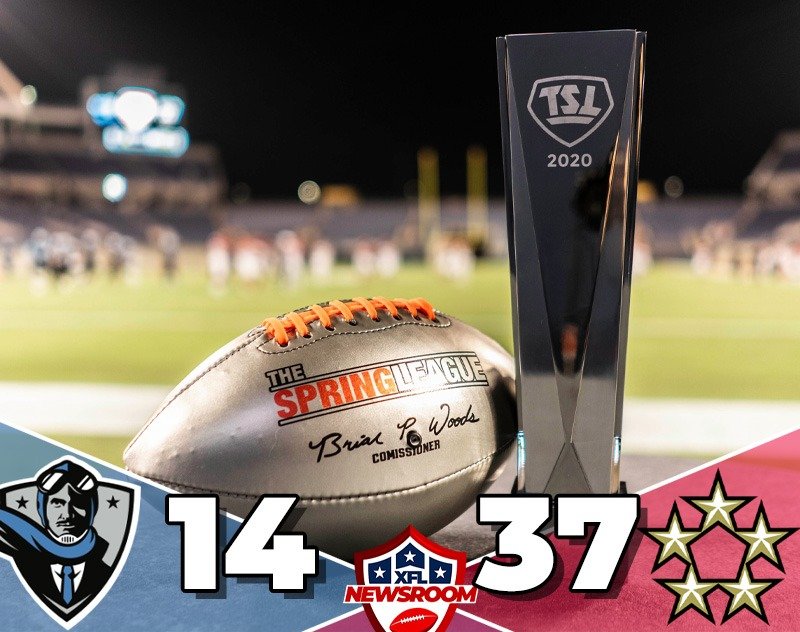 The Spring League concluded their 2020 season last night in Orlando, as they finally held the championship game between the Generals and Aviators. It took a month’s worth of waiting, but the league got both teams back together for one last rodeo to finish the year.

During the season, both teams played three games. The Generals finished the year 3-0, while the Aviators dropped their last game to the Conquerors, but still secured a championship spot with a 2-1 record. Despite both of these teams being similar in roster talent, it was the Generals who put on a show offensively and defensively, as they dominated the Aviators in a 37-14 shellacking.

While plenty of the players were able to come out for the Championship game, some opted out. One of those was the Aviators star QB McLeod Bethel-Thompson, who had performed quite well for the team during the season. George Bowen filled in for him, but did not bring the same level of experience, or quality of play.

To start the game, the Aviators got the ball, but turned it over on downs immediately. The Generals swiftly marched down the shortened field, and Bryan Scott found Melvin Vaughn for a TD off a tipped pass to take a 7-0 lead.

Not the way they drew it up but WR Melvin Vaughn (@melli_mel_1) secures this Bryan Scott (@BryanScottQb) tipped ball for the first score of the #TSL2020 Championship Game and his first receiving TD of the season.

Not long after the Generals scored, George Bowen overthrew Jordan Salima coming out of the backfield, and Channing Stribling (the former AAF Express and XFL Dragon) intercepted it, proceeding to take it to the house.

Channing Stribling, everyone!! The former @aafexpress and @XFLDragons makes another big play in @TheSpringLeague. He's already had a couple INTs on the year! This one goes for six. #TSL2020 #TheSpringLeague https://t.co/nCxjyEvdky

During the second quarter, both teams had opportunities to score points, but couldn’t finish off their drives, and it stayed a 14-0 Generals lead going into halftime.

In the third quarter, Matt Mengel opened things up with a bang, knocking through a 55 yarder. He broke his own TSL record, which was previously 53.

Midway through the third quarter, the Aviators offense finally came alive, and George Bowen capped off a solid drive with a one yard QB sneak. They converted on a two point try, and the game was 17-8.

QB George Bowen (@GeorgeBowenQB17) takes it the last yard himself on this keeper for the Aviators first points of the 'ship.

2 Point Conversion hauled in by @Dimitrioss_.

Once the Aviators started to make it a game, it turned into the Bryan Scott show. He dropped a dime to Jordan Suell for a 38 yard score, and then ran it in from 12 yards out to make it 31-8.

By air and by land, QB Bryan Scott (@BryanScottQb) isn't going to let this Championship moment opportunity pass on by. It's a keeper for six and a whole lot of insurance for the rushing TD.

Both teams traded another touchdown in the final minutes of the game, as the Generals ultimately claimed the championship trophy in a 37-14 victory. Both teams put up impressive efforts, but Bryan Scott and the Generals were too much for the Aviators defense to handle.

For obvious reasons, Bryan Scott is one of the biggest standouts from the entire season. Not only did his team win the championship, but he also won league MVP. Scott finished the season with over 1,000 yards, and threw 11 touchdowns to only one interception in four games.

Name a better trio than the red zone, Bryan Scott, and Sal Cannella…

TE @salnells hauls in this 9 yard @BryanScottQb pass for some more Generals insurance.

XP is no good.

Multiple other standouts from the Generals included WR Jordan Suell, who had four catches for 100 yards, and a TD. Darnell Holland added 51 yards on the ground with just five carries, which also contributed to their offensive success.

Channing Stribling made his name known throughout the year, as he set a TSL record by compiling four interceptions on the season (including two in the championship). As the announcers said during the game, he is certainly someone that could be playing on Sundays.

At the end of the day, The Spring League provided some enjoyable football to watch during this weird season of sports and entertainment. While it wasn’t perfect, and there were some questionable aspects, the league was able to end things on a high note as the Generals came out victorious.

With Bart Andrus and Mike Singletary on the Generals’ coaching staff, the team was bound for success, and it showed throughout the season. The Spring League will now set their sights on next year, and we look forward to watching more TSL action whenever it may be.

Which team did you root for in The Spring League? Did you enjoy watching the games? Let us know down in the comments below, or join the conversation on Discord!