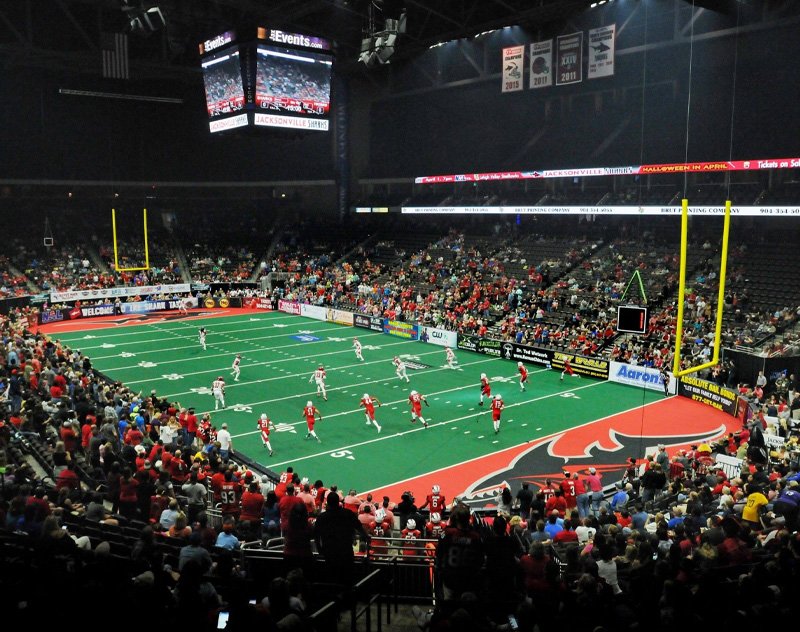 With the XFL on the sidelines for 2022 and possibly 2022, there have been a lot of eyes on the CFL. That being said, the CFL recently was forced to postpone the beginning of the 2021 season due to the ongoing COVID-19 spread in Canada. The league is targeting a August 5th return, but it could still be pushed out. A big factor in the delay is that the league is banking (quite literally) on having fans in stands.

The direction that infections are going up-north are preventing them from achieving that goal.

Meanwhile, down south in Jacksonville, Florida; things are looking completely different. The National Arena League’s Jacksonville Sharks have just announced that their 2021 home games will be allowed full capacity.

This decision comes after backing from Jacksonville City Officials. The Sharks are the 2019 NAL Champions; where they achieved a record-breaking 15-1 record. The Sharks will be returning to the Vystar Veterans Memorial Arena and according to the league’s press release masks are not mandatory.

Just yesterday we reported that former St. Louis BattleHawks defensive back Joe Powell had signed on with the NAL’s Carolina Cobras. Little did we know, we’d have more National Arena League to report so soon.

This is a huge step forward for the future of fan attendance. As more folks get the vaccine world wide, we’d expect and hope that things start getting back to normal.

You can read the full press release from the Jacksonville Sharks below:

JACKSONVILLE – The 2019 National Arena League Champion Jacksonville Sharks announced today that all Sharks 2021 home games will be allowed full capacity for fan attendance. This decision was supported by the Jacksonville Sharks organization and the Mayor’s Office of the City of Jacksonville who are mutually aligned with bringing back family affordable fun to Jacksonville this summer with the Sharks opening home game kicking off Saturday, June 12 at 7pm. The recent decision serves as a benchmark of progress for the city of Jacksonville and the state of Florida as many indoor venues across the nation continue to be held at capacity restrictions. These restrictions have led many sports teams to shut down or go dormant. Such was the case for NAL league member the West Virginia Roughriders, who like the Sharks came off a championship season in 2019 and were slated to be the season opener opponent for the Sharks in 2020.

In 2019, the Jacksonville Sharks achieved a record breaking year posting a 15-1 record and a 14-game winning streak that led to the Sharks hoisting their second National Arena League Championship trophy. The team also set records for the year end NAL awards including Franchise of the Year, Best Head Coach, Best Assistant Coach, Best Fans, Best Medical Team, Best Dance Team, and Best Game Day Experience. After a long cautious year of waiting, the National Arena League Champions will be returning to the Vystar Veterans Memorial Arena and more importantly so will the NAL’s best fan base “Shark Nation.” While masks are not mandatory they are encouraged for those who choose to wear them. We will continue to work to create a safe & healthy environment for each game during the 2021 season. The city’s crucial decision to act now to support the team in this goal will not only be a step in the right direction for the team but the city as a whole as Mayor Curry has been a true supporter of the state’s flagship approach to bringing business, live sports, and live entertainment back to the everyday lives of Floridians.

“I am excited to see our championship-winning Jacksonville Sharks retake the field to a full crowd at the arena this June,” said Mayor Lenny Curry. “The people of Jacksonville have been through so much in the past year and I am grateful to get back to the lifestyle we know and love in Northeast Florida. Thank you to the Jacksonville Sharks, National Arena League, and the hardworking team at the Vystar Veterans Memorial Arena for bringing live sports back to the River City.”

In 2019 the Sharks averaged over 7,000 fans a game and boasted nearly 9,000 fans for the National Arena League Championship game that was hosted in Jacksonville in August, 2019. The Sharks ability to have full capacity with the league’s best fans only improves the team odds towards bringing a third National Arena League title to Jacksonville. The Shark tank is one of the toughest arenas for visiting teams to play in as proven by the team’s 68-27 home record.

“The decision to have fans back in the arena is awesome, we can’t thank Mayor Curry and the Governor enough. It’s been a tough year, not sure what we would have done without the support of our fans.  We’re excited to get back into the arena and start playing some football.” said Sharks President Steve Curran

About the Jacksonville Sharks

The 2019 & 2017 NAL Champions and ArenaBowl XXIV Champions play all their home games at the Jacksonville Veterans Memorial Arena. Sharks Nation Memberships for the 2021 season are now available.  For more information please visit: www.jaxsharks.com or call 904-621-0700 ext. 717, if you are a local business owner, the Jacksonville Sharks offer Jaws Packages, which provide FREE advertising for your company with the purchase of 4 season tickets, for more information