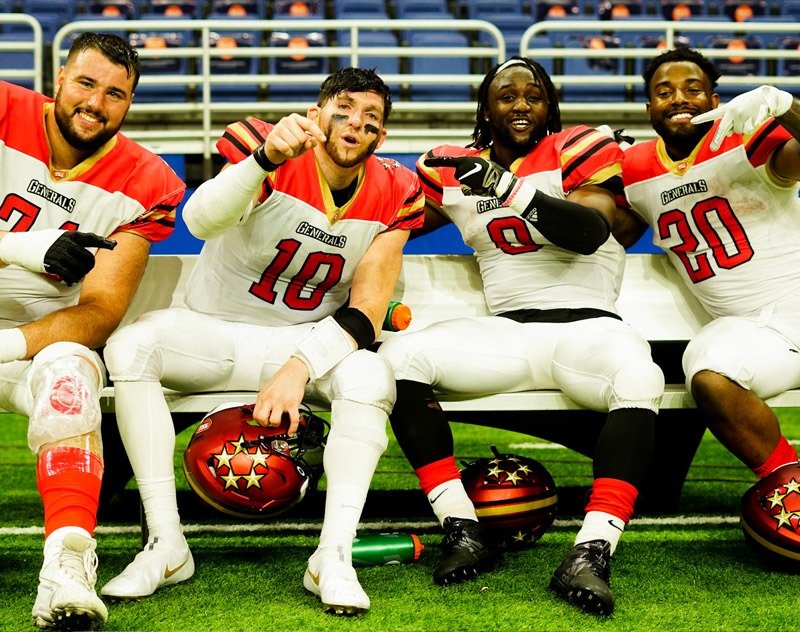 Recap of The Spring League’s Third Week of Action

We are officially past the halfway point in The Spring League’s short season. With week 3 being complete, only one more week remains, and then the championship game will be played. While the product on the field has been enjoyable, the league has faced quite few issues this week behind the scenes. They’ve had coaches upset about payments/compensation, they’ve had scheduling issues, and even had to cancel one of the games due to COVID-19. Let’s take a look at what happened in each game of week 3.

In a sudden flex due to COVID-19 concerns, the Aviators vs Conquerors match was aired by Fox on Tuesday. It was supposed to be the Jousters vs Alphas, but because of something related to the pandemic, that game was moved out of primetime. Despite the short notice, both teams were able to put it together to play on Tuesday instead of Wednesday.

Opening up the game, Matthew Sexton took the opening kickoff to the house for 90 yards, giving the Aviators a quick 7-0 lead.

Mat Sexton takes the opening kickoff to the house to give the Aviators the early 7-0 lead.

In his last return, @MathewSexton2 won the game for the Aviators in Week 2 with an overtime punt return against the Blues.

The Conquerors struck back quickly, as QB Kevin Anderson found Nick Holley (former XFL Roughneck) for an easy score. A blocked punt set up the Conquerors with excellent field position, but Anderson was intercepted in the endzone by DeShaun Amos, who ran it back for a touchdown to give the Aviators a 13-6 lead. The Conquerors claimed a 15-13 lead however, as Matt Mengel banged through a 51 yarder, and then Jordan Salima ran it in for a TD.

A deflected McLeod Bethel-Thompson pass resulted in a pick six for the Conquerors, and they led by 8. Another Salima score had them up by 15 going into halftime.

Despite the Aviators’ offensive talent, they consistently shot themselves in the foot. They turned over the ball 5 times, and the Conquerors cashed in on those bigtime.

A standout player in the duel was Dan Williams (former XFL Viper), who had over 150 yards receiving and a TD for the Conquerors.

The Conquerors ran away with it in the 4th, and ended up winning the game 42-19 to get their first victory of the season. Now at 1-2, they still have a chance at the championship game. The Aviators need to get things together offensively (and defensively) if they want to come out on top in this short TSL season.

In a disappointing turn of events, the Alphas vs Jousters game was forfeited/cancelled, due to complications from COVID-19. The Spring League posted this on Wednesday:

Due to lack of practice time because of COVID-19 protocols, the Jousters will forfeit their Week 3 game against the Alphas.

Both teams have resumed practicing. pic.twitter.com/yqG5AqSccW

While the decision itself is understandable (the pandemic hasn’t disappeared), it’s a shame that the Jousters and Alphas will not be able to play a game in a season that is already quite short. These players need game film – that’s the entire point of TSL’s existence. To cancel a game completely robs the players of opportunities, and it’s a move by the league that should not have happened like this.

The Jousters were handed a loss (since they forfeited), dropping to 0-3, while the Alphas were given a win to improve to 2-1 on the season.

The final game of the week proved to be a good one, between the Blues and the Generals. The Generals came into this game sitting at 2-0, while the Blues were 1-1 after losing last week to the Aviators.

Opening things up, the Generals swiftly marched down the field, as QB Bryan Scott made some impressive throws, and RB Paul Terry scored to give them a 7-0 lead. Not too long after that, Shea Patterson scrambled for a 2 yard TD, to tie things up.

Before the half, Bryan Scott threw his first TD in the game, finding Kelvin McKnight from 12 yards out to make it 14-7.

XP by @Lirim_70 is good. pic.twitter.com/CvICGoClW7

In the 3rd quarter, it was the Matt Colburn show, as he single handedly made plays to keep the Blues in the game. He ended the day with close to 200 yards from scrimmage (air/ground), including this 14 yard TD to tie things up:

RB Matthew Colburn II (@2mjayc) gets the Blues on the board first in the second half to tie this ball game up.

Bryan Scott continued to light things up, finding Sal Cannella for a TD, and then on the next drive, found Jordan Suell for a 71 yard bomb to give the Generals a 28-14 lead.

The Blues responded quickly, as Shea Patterson dropped a dime to Joe Walker to pull it within 7 – but then on the kickoff, Darnell Holland took it 90 yards to the house, and the Generals led 35-21. While the Blues still had an opportunity to come back, Patterson was intercepted (his 2nd of the day), and just a few plays later, Bryan Scott found Jordan Suell again to make it 42-21 and practically ice the game.

The Blues added a TD (and an onsides kick recovery) before the game ended, but the Generals domination in the 2nd half was too much for the Blues to overcome, and they fell to 1-2 losing 42-28. The Generals, on the other hand, improved to 3-0 on the season, and solidified the top spot in the league.

Once again, the TSL enjoyed a week that was filled with some exciting football, even though the two televised games weren’t as close as they have been in previous weeks. Each team had players who showed they had potential to make it to the NFL, and the product on the field was fun to watch.

While there were some bickering and small brawls between teams at times, the messy aspects we saw in week 2 were mostly cleaned up. With that being said, week 2 did provide us with more excitement, and so far was the most enjoyable week.

As of now, it seems as if the championship game will be played on December 2nd, at the AlamoDome. Week 4 is still up in the air, as they have to find a place to play it. With the Generals having a championship bid locked up, it’ll most likely come down to the Aviators and Alphas who claim that second seed.

Which team do you root for in The Spring League? Do you enjoy watching? Let us know down in the comments below, or join the conversation on Discord!