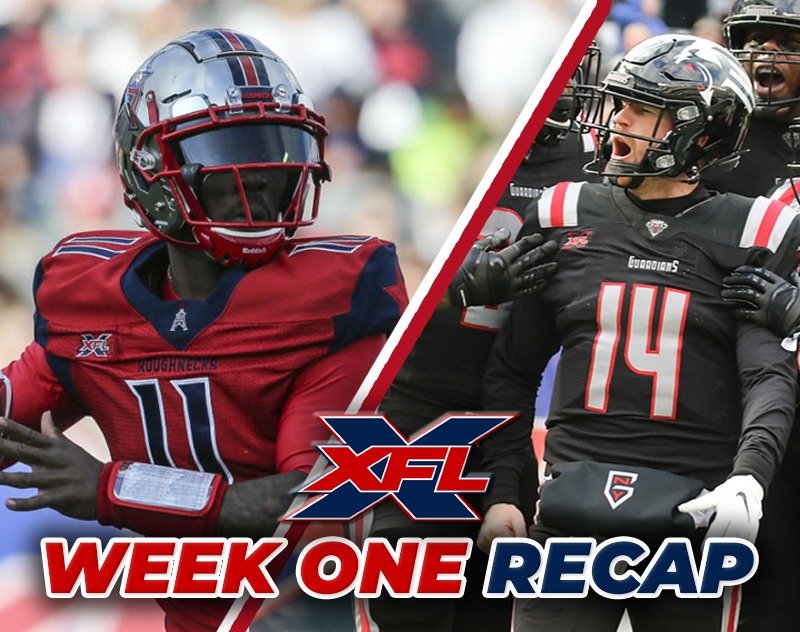 Week One Recap and XFL Standings

Week one is in the books for the XFL and overall it seems to be a success. The first game between the DC Defenders and the Seattle Dragons drew 3.3 Million viewers, out-drawing the NBA Prime time game by over 1 Million. Not to mention, the league has already surpassed the AAF in ticket sales revenue.

Join us as we give you a full recap of the XFL’s opening weekend, as well as the standing now that all of the games have concluded.

Anticipation was in the air at Audi Field. The DC Defenders hosted the Seattle Dragons for the first ever XFL game. The first half was a pretty even match-up for both teams. The Defenders, living up to their name scored the first touchdown of the game via their defense.

Fitting the first touchdown in Defenders history was made by the defense.#ForTheLoveOfFootball pic.twitter.com/wkf63jJyyF

Going into the half both teams had scored and the margin was slim at 13-12 with the Defenders on top by 1. Both teams traded touchdowns in the third tying the game 19-19. Unfortunately, this was the end of the Seattle’s luck. DC controlled the rest of the game. Both on offense and defense. First, Cardale Jones made an impressive pass to Rashaad Ross for the touchdown, putting them back on top 25-19.

Brandon Silvers and the Dragons were now back in charge, but ultimately Silvers hammered the final nail in the coffin when he threw an interception with Bradley Silva returning it 69 yards for the 6 points. DC was unsuccessful in their 1-point attempt, but it didn’t matter. They held their 31-19 lead for the rest of the game.

The second match-up of the weekend saw the Los Angeles Wildcats travel to Houston to take on the Roughnecks. Houston was efficient on all sides of the ball, forcing four turnovers and limiting the Wildcats’ opportunities when they did have possession. However, it was the star of the night in Roughnecks quarterback P.J. Walker, who threw 23-for-39, good for 59 percent completion, along with 272 yards, four touchdowns and only one interception that came late in the fourth quarter after they already amassed a 20 point lead.

Head coach June Jones executed a perfect play call on the offensive side of the ball. While the defense struggled early, they were able to find themselves towards the end of the first half and put together the start of what would be 25 straight unanswered points by the Roughnecks to give them the 37-17 victory, going to 1-0 on the season and topping the Western division in the XFL.

The Roughnecks will look to continue their winning ways as they play at home once again at 5 p.m. on Sun, Feb 16 at TDECU Stadium as they take on the St. Louis Battlehawks in the final game of week two play.

In their preseason match-up New York dominated the Vipers, in the biggest blowout of all the games. Could Marc Trestment make adjustments to change the outcome? The Vipers were also out their star receiver, Antonio Callaway and you could see the impact on the field. Aaron Murray got the start for Tampa Bay, but just could not get the offense going. Only getting his team within field goal position (which they missed).

New York on the other hand came out strong, scoring in their opening drive. The Guardians drove the ball 44-yards over 8 plays with QB Matt McGloin ultimately running it in on short yards. The team was also successful with the their 1-point conversion

During this game, we saw the first ejection for the league, when Ricky Walker punched Matt McGloin.

The Guardians led 17-0 at the half. Trestmen opted to use both Murray and Flowers at QB for the second half, but still could not get any meaningful points on the board. The team ultimately settled on a field goal, which ended up being their only score of the night. New York continued to dominate though, closing out the game 23-3, tying the highest margin of the weekend with the Roughnecks.

The last game of the weekend was also the slowest to start. Landry Jones was unable to start for Dallas, filling his role was backup Phillip Nelson. At the helm for St. Louis was the youngest qb in the league, Jordan Ta’amu. Both teams went scoreless in the first in a defensive battle.

Ta’amu showed a lot of promise on the field, showing success both passing and running the ball down the field. Without Jones on the field, Dallas couldn’t seem to find their offense. Depending solely on kicker Austin MacGinnis to score all of the points in the match-up. Going into the half the game was tied 6-6. The BattleHawks had secured a TD via a hand-off to Keith Ford.

The second half was more of the same for Dallas, only securing three-points via a field goal. St. Louis on the other hand saw Ta’amu connect on his first passing touchdown. The team was also able to extend the lead with a field goal and ultimately ended the game with a Will Hill interception.

Dallas hopes to rebound next week, where it’s expected that Landry Jones gets the start against the Wildcats.

The St. Louis BattleHawks know how to celebrate a win 😆🍻

You read the recap, but what about the standings? We got you covered!

Houston stands along as the only team in the West with a victory, and all but Tampa Bay secured the W in the East. We’re still early in the season, so these standings could be flipped upside down by the end of the season.

What do you think of the games this weekend? Do you plan on watching next week? Let us know down in the comments below, or join the conversation on Discord.