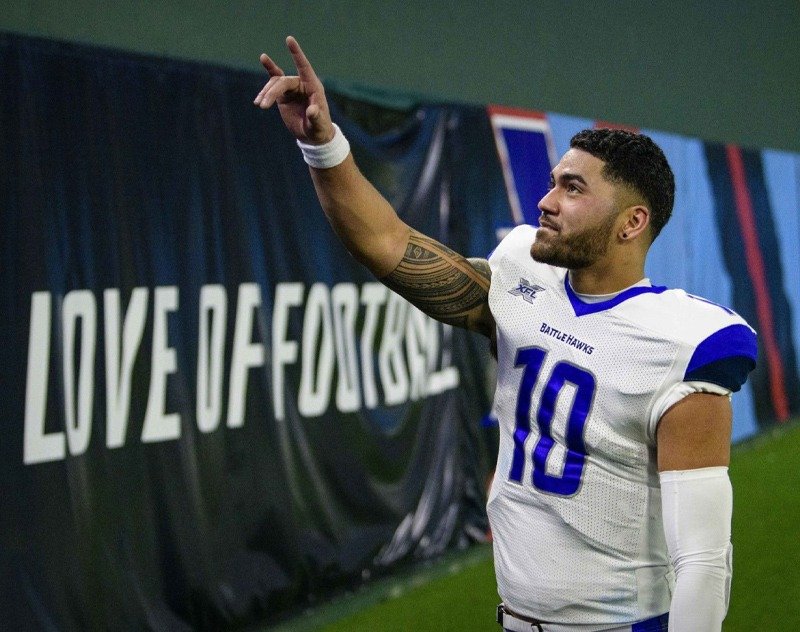 Why the St. Louis Battlehawks Should Re-sign Jordan Ta’amu

In order to open up a slot on their practice squad, the Kansas City Chiefs have cut former St. Louis BattleHawks quarterback Jordan Ta’amu from their team. Seeing zero snaps on the field with no playing time, the 22-year-old Hawaiian finds himself stranded in the wilderness of free agency. For now, the Throwin’ Samoan’s journey in the NFL has come to a close. Instead of waiting for another NFL team to pick Ta’amu up, which will likely happen considering his skill, I suggest the BattleHawks should try to bring him back to St. Louis. Here are a few reasons why:

He’s got the talent and now he has more skill

Tearing through opposing defenses with both his arm and his legs, Jordan Ta’amu was an absolute beast in St. Louis. His great success with the BattleHawks was what got him his job with the Chiefs. He was a fantastic player in the spring, and his time with the reigning Super Bowl champions has undoubtedly made him even better. The Chiefs are easily one of the best teams in the NFL and most certainly have the personnel and resources to help a young quarterback hone his skills. Coaching and facilities are just half of the equation; nothing’s better than learning from the best in the craft, and Ta’amu hit the jackpot with Chiefs starter Patrick Mahomes. With him having spent months with the best in the business, having Ta’amu return to St. Louis would be an extremely enticing possibility for the BattleHawks.

Despite his short tenure with the BattleHawks, Ta’amu has won the heart of St. Louis. The city’s longing for a football team drew fans into the stands, but Ta’amu’s exhilarating gameplay made coming well worth it. His willingness to embrace the city earned the respect of numerous fans, along with his consistent warm personality.

He was easily a fan favorite with the BattleHawks and fans were sad to see him go. With his entrance into free agency, I’m positive fans would be ecstatic to have him return. All the BattleHawks have to do is open their wallet.

So, what do you think? Do you think Ta’amu could make a return to St. Louis? Do you think he should? Let us know down in the comments below or join the conversation on Discord!