What Cities are in Play if the XFL Returns?

Last week, news started circling the internet that the XFL may be returning… and Vince McMahon may be the buyer…. It’s hard to say if that is the case or not, but since those rumors started we’ve learned some more information that points to the possibility that the league may be preparing to return with or without Vince.

If the XFL is indeed set to return, what cities are in play? Here’s what we’ve learned so far.

Naturally, St. Louis would be in play if the league was to return. Since the host cities were announced for the XFL, St. Louis has been a fan favorite due to the fact that they were the only XFL city without an NFL franchise.

The BattleHawks led the league in attendance and were on pace to sell 50,000+ seats to their week seven match-up against the Los Angeles Wildcats before the league was forced to suspend the season. According to Danial Kaplan of The Athletic, XFL representatives reached out to the city of St. Louis about restarting their lease agreement with The Dome at America’s Center.

In the same report Kaplan states that league representatives also reached out to the restart the lease agreement with CentrutyLink Field in Seattle. This makes sense because The Dragons were a not-to-distant second in attendance behind the BattleHawks.

The Seattle Dragons drew a very impressive 29,172 fans for their first game at CenturyLink. Even with a not-so-stellar record, The Dragons still pulled in over 22,000 fans for their lose against the Dallas Renegades. The city of Seattle had embraced this team from the very start. The franchise drew over 1,000 fans to a free practice event prior to kickoff. If the XFL is coming back, they’d love to have this fan-base behind them.

Are the @XFLBattleHawks about to fly again?

The Athletic's @KaplanSportsBiz says the XFL has reached out to St. Louis and Seattle about restarting the league's lease agreements.

Those aren’t the only two cities that have been contacted by XFL representatives. According to Mark Berman of FOX 26 Houston, the University of Houston has been contacted by the league to see if the TDECU Stadium rental and practice agreements could be used as assets if the XFL is acquired through the bankruptcy proceedings.

This is another city that makes sense, The Houston Roughnecks went undefeated in the shortened season holding a 5-0 record. Since the beginning, the XFL seemed to have a close relationship with the city of Houston. The league and mayor worked close to strike a deal to make Houston the central home of the XFL training camp/pre-season. Additionally, TDECU Stadium was set to be home of the inaugural XFL Championship.

A sign the XFL (@xfl2020), which is in bankruptcy, could return and return to Houston. According to sources two XFL representatives contacted @UHCougars officials to see if the TDECU Stadium rental and practice agreements that were… pic.twitter.com/4jhBjHxRET

At the moment, those are the only three cities that have been confirmed to receive contact from the XFL. That leaves five more if the league was to come back. Let’s look at some other potential locations that the league may think about re-locating some of the franchises.

According to Chuck Miketinac of FOX San Antonio, the XFL was calling several cities to gauge potential interest in a relocating one of the existing franchises to their town prior to filing Chapter 11 Bankruptcy. One of those locations was San Antonio, former home of the AAF‘s Commanders.

“Two sources told us San Antonio had exploratory conversations with the XFL about the league possibly moving one of its existing teams to the Alamo City.”

It seems the XFL was looking to relocate up to three of its teams. The Los Angeles Wildcats, New York Guardians and Tampa Bay Vipers have been named as prime candidates as they all averaged less than 12,000 fans per home game.

I’m not sold that any of the three teams mentioned above would be re-locating to San Antonio, but I could see the Renegades making the move to a much more affordable Alamo Dome.

As mentioned above, the Tampa Bay Vipers were one the the teams that were up for consideration for re-location. It was rumored that the XFL wanted to use Orlando as a host city, but decided against it due to the AAF already having the Apollo’s in place. Had they known that the Alliance would fold, The Vipers may have never played in Tampa Bay.

If the league is exploring a return, we could imagine the league reaching out to the city of Orlando, which we expect would welcome them with open arms. The Apollos played out of Spectrum Stadium on the campus of the University of Central Florida. Another candidate could be former home of the Orlando Rage, Camping World Stadium. Either way you look at it, Orlando could be a cost-effect alternative to Raymond James Stadium up in Tampa Bay.

The Los Angeles Wildcats had a long road ahead of them from the start. LA is not known as a huge sports city and you could see that by the number of people in attendance at Dignity Health Sports Park. Similar to The Vipers, it was rumored that the XFL originally wanted to play in San Diego, but because of the AAF they settled on Los Angeles.

If the league is exploring a return and The Wildcats were already being considered for relocation, we wouldn’t bet if the league decides to head to San Diego. Another major benefit to the move is similar to St. Louis, San Diego has also recently lost their NFL franchise to Los Angeles. If the move is made, we’d expect them to land in the former home of the San Diego Fleet, SDCCU Stadium.

Yes.. Yes… I know that MetLife Stadium is in New Jersey, but this is more about the stadium rather than the actual location. Prior to shutdown, there was rumors that the league was looking at the possibility of moving the New York Guardians from MetLife to RedBull Stadium. The Guardians struggled in attendance, some of which could be contributed to the cold weather in the early season as well as their record.

Regardless, MetLife has 80,000 seats to fill, so even with a 20,000 person crowd it still barely fills the lower bowl. Not to mention, the rent on a venue like that can not be cheap. These are the two major benefits to making the move to Red Bull Stadium. It’s much more affordable and holds roughly 20,000 people. In my opinion, this is a perfect size for an XFL team.

As mentioned at the start, had it not been for the news that the league was reaching out to host cities I wouldn’t be sold on the idea that the XFL would be coming back. That being said, it’s not a done deal yet so don’t get your hopes up until we start seeing some official announcements from the XFL.

We’ll keep you posted as more information comes out on the leagues return as well as where they may play when they comes back. What do you think of all this news? Where would you like to see the XFL relocate? Let us know down in the comments below or join the conversation on Discord. 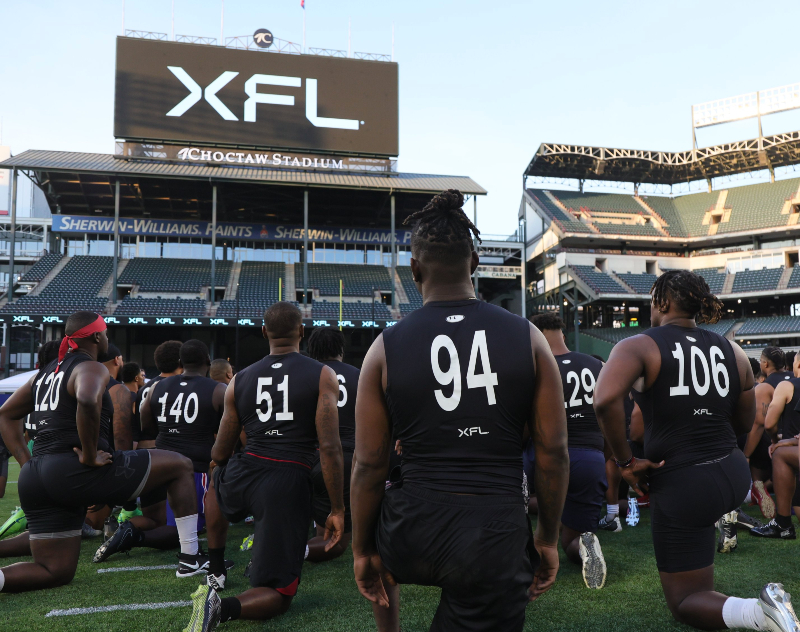